The business case for recycling communications has been laid out in a new report by the Aluminium Packaging Recycling Organisation (Alupro) reviewing the MetalMatters programme and demonstrating the power of voluntary industry backing. Figures are based upon data from campaigns that have run in 50 local  authorities across the UK between 2012-2015, with the support of the metal packaging industry partnership.

The MetalMatters campaign, which has now reached over 3 million householders, has  proved extremely cost-effective, raising metal capture rates at the kerbside  and in so-doing generating revenue for local authority and waste management partners.

Key statistics from the report reveal a MetalMatters campaign: 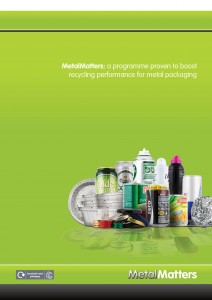 “Since 2012, the MetalMatters programme has seen over £1 million invested by funding partners in the metal packaging industry. This is above and beyond their obligations under the Producer Responsibility (PRN) system,” said Rick Hindley, Executive Director of MetalMatters project managers, Alupro.

“The campaign has also attracted funding from sectors not included in the Producer Responsibility system (including household foil and closure manufacturers), because they see the value of working with the wider industry to promote the recyclability of metal packaging.  Of course there is still scope to widen the funding base further and we’d encourage any brand or packaging producer to consider investing in MetalMatters.”

The new report, ‘The business case for recycling communications’ sets out the positive and lasting impact the campaign has on the recovery of metal packaging from the kerbside. As well as reducing disposal costs for local authorities, the increase in metal packaging recovery generates additional revenue and provides a long-lasting positive impact on household recycling behaviour.

Hindley added: “The MetalMatters campaign is an example of industry taking a uniquely proactive approach. Importantly, MetalMatters has won the support of policy makers by providing vital support for recycling schemes at a time when council budgets are being cut.

This shows what can be achieved from partnerships between commercial organisations, local authorities and their waste collection partners – and the results speak for themselves.”

The voluntary scheme is part-funded by supply chain businesses in the metal packaging sector, delivering extended producer responsibility and excellent corporate social responsibility. It is a government-recognised, best practice example of industry working with local authorities to keep valuable materials in the loop.

Two leaflet drops, typically six weeks apart, inform and remind householders about what and how to recycle and explain what happens to metal packaging after it is collected. The communications materials are tailored to fit with existing local authority or waste partnership branded campaigns. Additional communications resources are available to reinforce the message via local channels and networks, including vehicle livery, displays, roadshow events and newspaper and radio advertising.

The availability of tried and tested campaign materials is a key element in the cost-effectiveness of the campaign, and gives campaign partners additional reassurance that the campaign messages will generate lasting results.

Glasgow City Council’s Recycling Manager Scott Armstrong says: “The leaflets have obviously been successful elsewhere and benefitted other local authorities so we were confident that the messages were tried and tested.  We are still featuring MetalMatters messaging on the council website and collection vehicles, and hope that will encourage the public to keep recycling more metals.”

The MetalMatters campaign has been proven to work in urban and rural areas, and with all types of recycling scheme. It can be delivered in a single local authority, to targeted groups, or across a waste partnership area.

MetalMatters to the rescue for cash-strapped councils